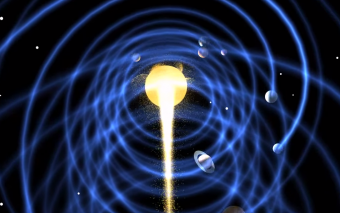 Amazing! Our Solar System Is A Vortex (3-minute vid)

This is a non-conventional but more empirically accurate view of our solar system that is different from the standard ‘flat’ diagrams. Our Solar System is a vortex!

“A circle is a spiral with the progress taken out”

The old Newtonion/Copernican Heliocentric model of our solar system is an unproven theory.

A bright fellow named Dr. Pallathadka Keshava Bhat came up with quite a different way to think of our Solar System.

There are a couple of reasons why I think this model could just be right.

First of all, the heliocentrical model has always been presented (especially by NASA) as a “frisbee” model.

[image taken from here]
Think about this for a minute. In this diagram it seems the Solar System travel to the left. When the Earth is also traveling to the left (for half a year) it must go faster than the Sun. Then in the second half of the year, it travels in a “relative opposite direction” so it must go slower than the Sun. Then, after completing one orbit, it must increase speed to overtake the Sun in half a year. And this would go for all the planets. Just like any point you draw on a frisbee will not have a constant speed, neither will any planet.

Secondly, most planets are visible throughout the entire year. In a “flat” model, every single planet would hide behind the Sun at least once a year. They don’t. Now the heliocentric model isn’t entirely flat, but mostly.