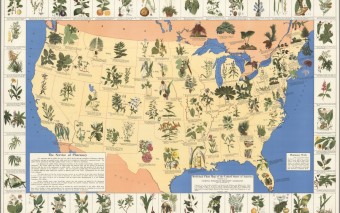 Slate just reported on this amazing map of ‘Herbal Cures’ from 1932 of the medicinal plants in common use among pharmacists and the public back then. The map itself states under the heading ‘The Service of Pharmacy’:

“It is important that the public does not lose sight of the fact that the professions of Pharmacy, Medicine, and Dentistry, each give an essential service, which must not be impaired or destroyed by commercial trends. The public and the professions whill suffer equally if these services are allowed to deteriorate. In pharmacy the public should understand something of the breadth of knowledge required of the pharmacist. Few people realize the extent to which plants and minerals enter into the practice of pharmacy, and how vital they are to the maintenance of the public health. It has been stated that upwards of 70 percent of all medicines employed are plant products.”

Flash forward 80 years and we have a medical system which relies almost entirely on patented chemicals and/or biologicals that are far removed from anything resembling the ‘back yard farmacy’ of yesteryear. The FDA’s very definition of a drug now precludes the use of natural substances, and drug-based medicine has become a form of human sacrifice, on a scale that may exceed previous civilizations sacrifice of their population for ostensibly religious reasons. This map should be shared far and wide and hopefully will shed light on the massive, emergent database of natural substances (there are about 1700 indexed on our website alone) that can be used to treat a staggeringly wide range of health conditions (over 3,000 indexed on our site alone).

Note: Amazingly, you will find the much demonized Cannabis Sativa listed as a medicinal plant used on the Druggist’s map! Consider that in modern times this plant alone has been used to incarcerate hundreds of thousands of citizens simply for possessing, using and/or trading it as a commodity!

Click here to view the massive, poster size version of this image.