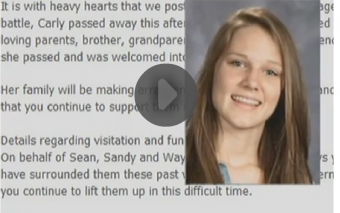 Teen Dies of the Flu Who Was Vaccinated Against It

MINNEAPOLIS (WCCO) — A Minnesota teen who was fighting for her life, after being ill with the flu, has passed away.

According to Westwood Lutheran Church, Carly Christenson passed away Tuesday afternoon after battling “Influenza A.”

Fourteen-year-old Carly was admitted to Children’s Hospital in Minneapolis on Christmas Eve, despite receiving the influenza vaccine.

In an earlier report, Carly’s father, Sean, said he held his daughter every day, hoping for a miracle.

“Every morning I get there, and she is there, it is another day with her, so that is all I can ask right now,” Sean Christenson said earlier this month.

Carly, who played basketball on the freshman sophomore team at St. Louis Park High School, returned home from practice Dec. 20, complaining of a bad sore throat. After a quick visit to urgent care, doctors believed it was just a mild infection.

They prescribed Prednisone and sent her home. After all, Carly had no obvious signs of influenza and she had been vaccinated in August, so her parents didn’t give it second thought.

However the next day, that sore throat progressed to fever, shortness of breath and wheezing. Carly’s lungs filled with fluid she was admitted to the hospital for treatment. Her clogged lungs were not providing enough oxygen to her body, so she was given a heart and lung bypass via what is called an ECMO machine.

Carly had been making a tiny bit of progress each day but needed constant blood transfusions.

The Christensons urged those who can to donate whatever blood products they can to replenish the system and help other victims of Influenza this season.

It was late in the afternoon when students inside St. Louis Park High School learned about Christenson’s death.

Assistant principal Scott Meyers says the school did what it could to help the students affected by her passing.

“We had a conference room that we had opened up for students to meet and congregate,” he said.

The girls basketball teams canceled their Tuesday night games. Instead, team members and their families gathered in the school’s gym. It was their time to grieve and be there for one another — no cameras, no interviews, just time to cope with the loss.

The boys basketball team went on with their game at Fridley.

Adam Osman and Caelia White are seniors at the high school. They went to support the boys team, but couldn’t help  thinking about Christenson.

They didn’t know her, but they witnessed the impact her passing had on others.

“It hit everyone,” White said. “They were all just bawling in the hallway…it was hard to handle.”

The Shocking Lack of Evidence Supporting Flu Vaccines
Written by Sayer Ji, Founder
It is a heavily guarded secret within the medical establishment (especially within the corridors of the CDC) that the Cochrane Database Review, which is the gold standard within the evidence-based medical model for assessing the effectiveness of common medical interventions, does not lend unequivocal scientific support to the belief and/or propaganda that flu vaccines are safe and effective.

Studies Find Flu Shots Can Harm Your Heart, Infant And Fetus
Written by Sayer Ji, Founder
Flu vaccines, according to the best scientific evidence available today, will only work against 10% of the circulating viruses that cause the symptoms of seasonal epidemic influenza. Additionally, flu vaccines have been found to elicit inflammatory reactions that may harm the human heart, the developing fetus, and the fragile immune systems of our infants. So, do the theoretical benefits really outweigh the known harms?

ObamaCare: What You're Not Being Told Previous
Johns Hopkins Scientist Blasts CDC for Pushing Flu Shot Next